A recap from Wikipedia tells us that:

John Cameron Fogerty (born May 28, 1945) is an Americanrock singer, songwriter, and guitarist, best known for his time with the swamp rock/roots rock band Creedence Clearwater Revival. He was born in Berkeley, California.

The concert was amazing, even though I don't listen to this type of music I found the performance excellent. And speaking of excellence, the drummer was AWESOME. I later found out it's none other than THE Kenny Arnoff.

Combine that, with Dave Santos on bass, Matt Nolen on keyboard, Hunter Perrin on one guitar, and Billy Burnette (of Fleetwood Mac!) on other guitars, and you get a line-up that plays really well together.

As far as photographing goes, we were limited to two stage positions and for two songs. We had to stay fixed and so the photos are all from the same angle. The lights were OK and the ambience was great. One thing though, that was different was the placement of the stage. Instead of facing the exit, it was sideways. Interesting... 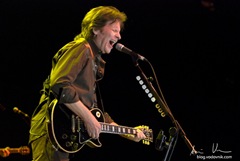 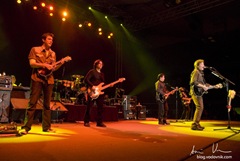 My friends [http://www.myspace.com/worldwithinmusic] had a gig recently in…

Wow. It happened. I took pictures at Mark Knopfler's concert in Zagreb.…