What is going on with me?

It’s been a while since I’ve posted anything here. And I wanted to :) I have a session I really want to post, but just don’t have the time to finish it (post-pr…

It’s been a while since I’ve posted anything here. And I wanted to :) I have a session I really want to post, but just don’t have the time to finish it (post-processing), the girls are anxiously waiting for me. There’s a million little things I have to do. Among other things I am also doing is moving to Koper which incurred some logistical issues :-).

Anyway, another important thing that’s keeping me busy, or was keeping me busy recently, was the formation of a company of which I am the co-owner. I am helping with the business plan part, in particular the technical details of the whole operation. The company was founded a little less than a month ago, the official name is Lumian računalniški laboratorij d.o.o.

The company will develop or rather, bring to life, an innovative concept to social networking as we know it now. The goal is to reach a lot of households throughout the world. A small, yet very important step, was accomplished today at the announcement of the results for the best business plans; a competition organized by Tehnološki park Ljubljana. We won 2nd place. Although it’s not first place, it’s still an excellent foundation for our future work and a confirmation of our current work.

Apart from that, professionally/career-wise, I’ve started C++ programming now and am working on some pretty interesting stuff at AGB Nielsen Media Research Lab, down at Portorož. It involves some fascinating things and requirements that you rarely see in today’s programming nowadays, especially if you stay in a field where I worked on before – business applications like CRM/ERP. As this is still a blog o a computer programmer/architect and a photographer, I hope to be able to post some more details, and maybe some code segments in the near future.

As far as concerts go, I know I missed a couple really good ones lately, but I haven’t had the time. I plan on fixing that soon as well. I’ll probably devote some time for that after my upcoming birthday :).

So, until I get the permission from the girls, here’s a picture from a recent event I did attend :). Thanks Mateja & Mojca. 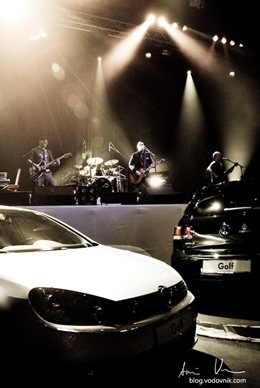